This chapter provides a high-level summary of developer activities when using HAMR. This includes:

HAMR supports multiple programming languages for coding the functionality of components and systems whose infrastructured is auto-generated from HAMR. Workflows for both Slang and C programming languages are illustrated in this chapter. The first two items above (AADL modeling and AADL analysis) are independent of whether or not Slang or C is being used as the programming language. Accordingly, the content of the chapter is organized as follows:

Throughout the presentation, forward references are provided to subsequent chapters that provide more details.

HAMR workflows begin with creating AADL models of components and systems in the OSATE AADL tool. OSATE is based on the widely-used open-source Eclipse IDE. HAMR is currently distributed in special “branded” distribution of OSATE called the Formal Methods Integrated Development Environment (FMIDE) developed on the DARPA CASE project. 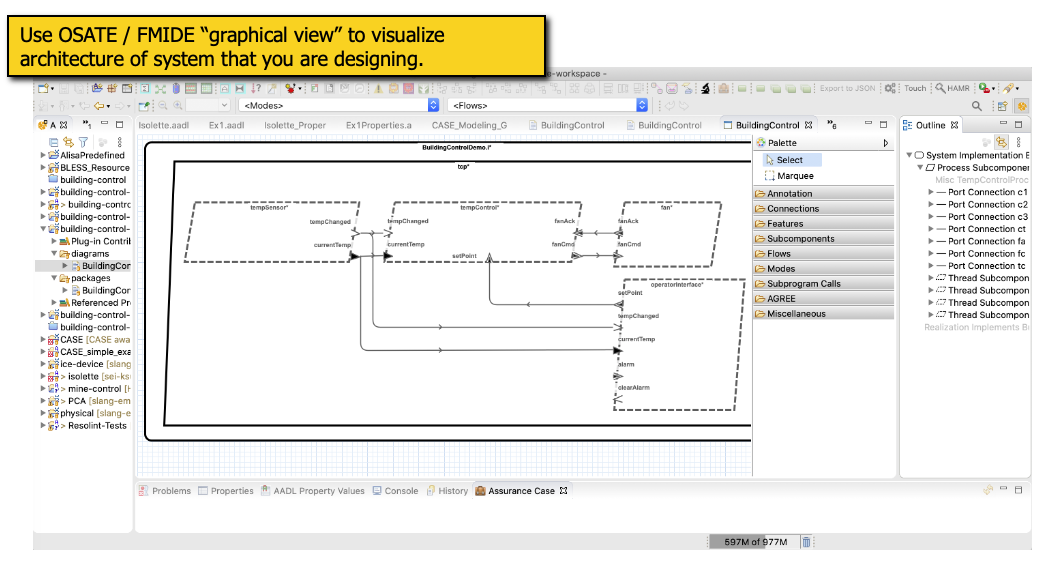 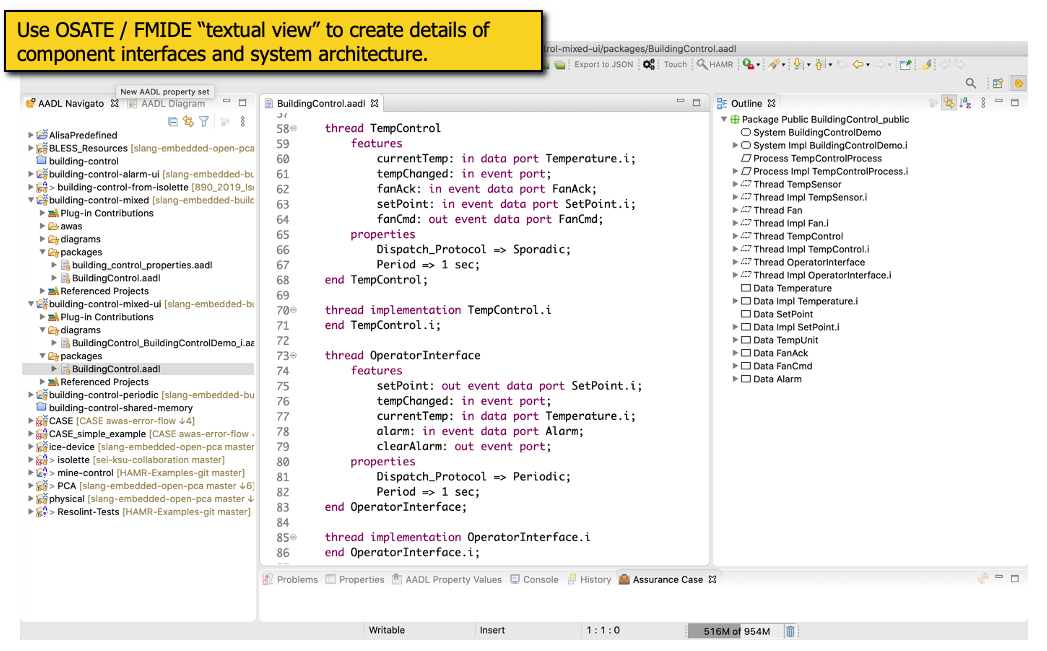 OSATE includes different analysis and code generation plug-ins whose functions can be accessed through the menu system or through icons in the tool bar. Some OSATE/FMIDE capabilities require additional libraries to be installed, they vary in their maturity, and they work on different model features/properties (some of which may not be included in your models) – so the take away is that you should not expect all other OSATE plug-ins to work on models in the HAMR documentation nor models that you build. However, all HAMR-related related features described in this documentation should work.

AADL systems are built from different kinds of components.

With HAMR, the most important component kind is a thread component, which corresponds to a real-time task in real-time systems literature.

HAMR generates code skeletons for thread components, and a developer implements a system by (a) using a HAMR-supported programming language to program the behavior of thread components and (b) using other AADL modeling elements to group and “wire” components together.

HAMR also generates for communication infrastructure for the wiring between components, and platform infrastructure code corresponding to other kinds of AADL components such as process and system – which are used to aggregate thread components so that they can be associated with various system resources and configurations.

Each AADL software component, e.g., a thread, process, or system, has a specified interface captured as an AADL component type. AADL emphasizes port-based inter-component communication, and so an AADL component type (interface) is a collection of ports. There are several categories of AADL ports (event, data, and event data), and a port category (together with optional port properties) indicates a particular pattern of communication to be used for communication on that port.

HAMR only supports uni-directional ports and connections (with port direction indicated by in and out), so as to enable (a) clean design of security and information flow controls and (b) model- and code-level information flow analysis. 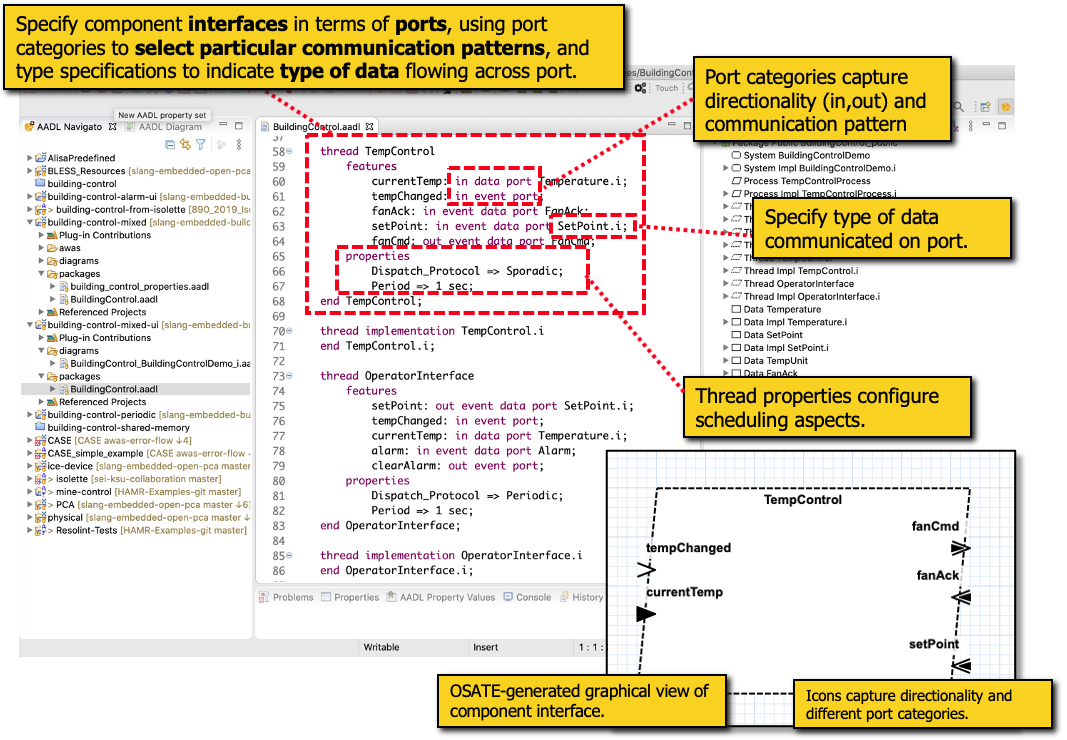 Later in the workflow, HAMR will generate code-level interfaces for modeled component types.

Once these types are defined, they are referenced in component interface specification to indicate the types of data flowing across ports. 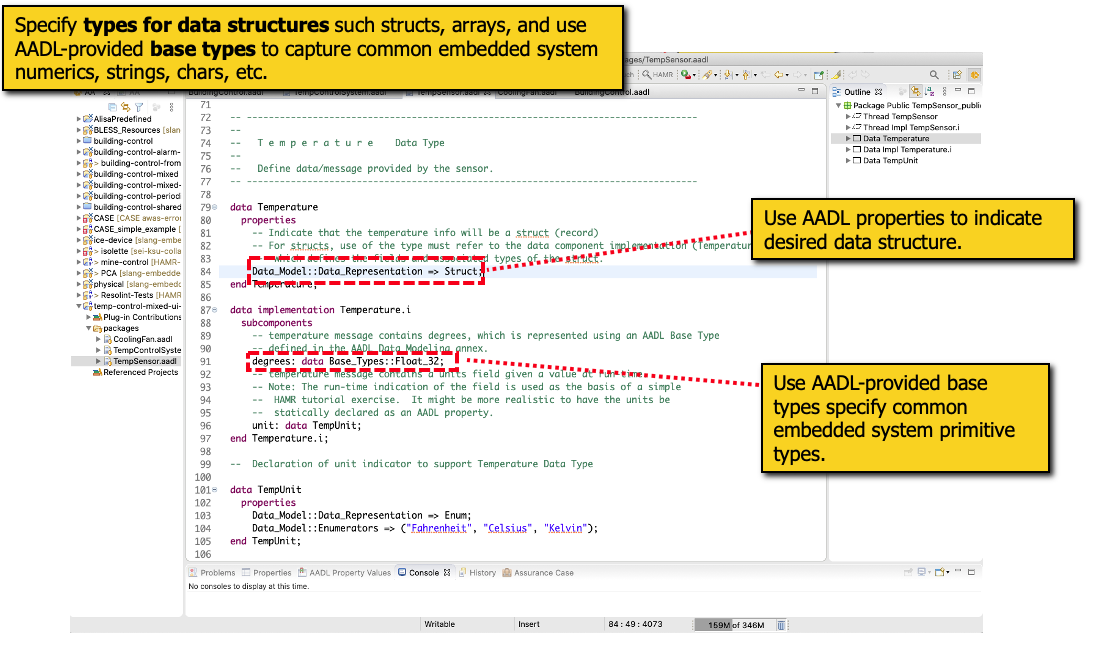 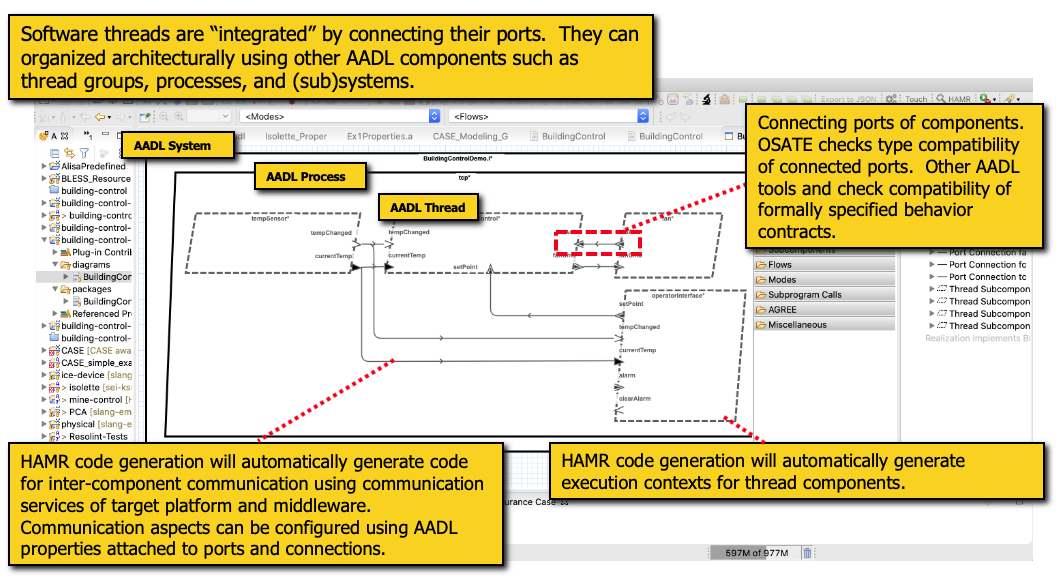 A key aspect of these integration activities is using AADL connections to associate the output ports of one component with the input ports of another. AADL’s type checking checks that connected ports are type compatible. Other AADL tools such as AGREE and BLESS can be used to specify contracts (formal specification of data constraints and input output relations) and then check that connected ports/components have compatible contracts. 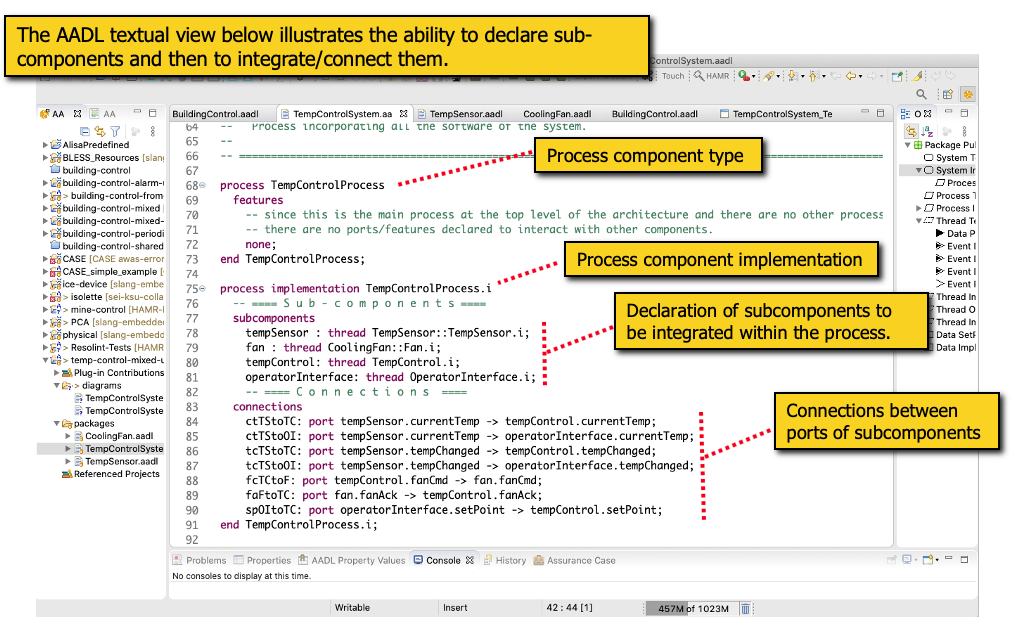 Once the software architecture is specified, HAMR can generate code for it (illustrated in later in the workflow). HAMR generates execution contexts, thread skeletons, and APIs for port communication for thread components. The developer fills in the thread skeletons to complete the component implementation.

Once the AADL model has been developed to a level of detail sufficient to support code generation, the HAMR code generation capability can be invoked from the OSATE menu system. 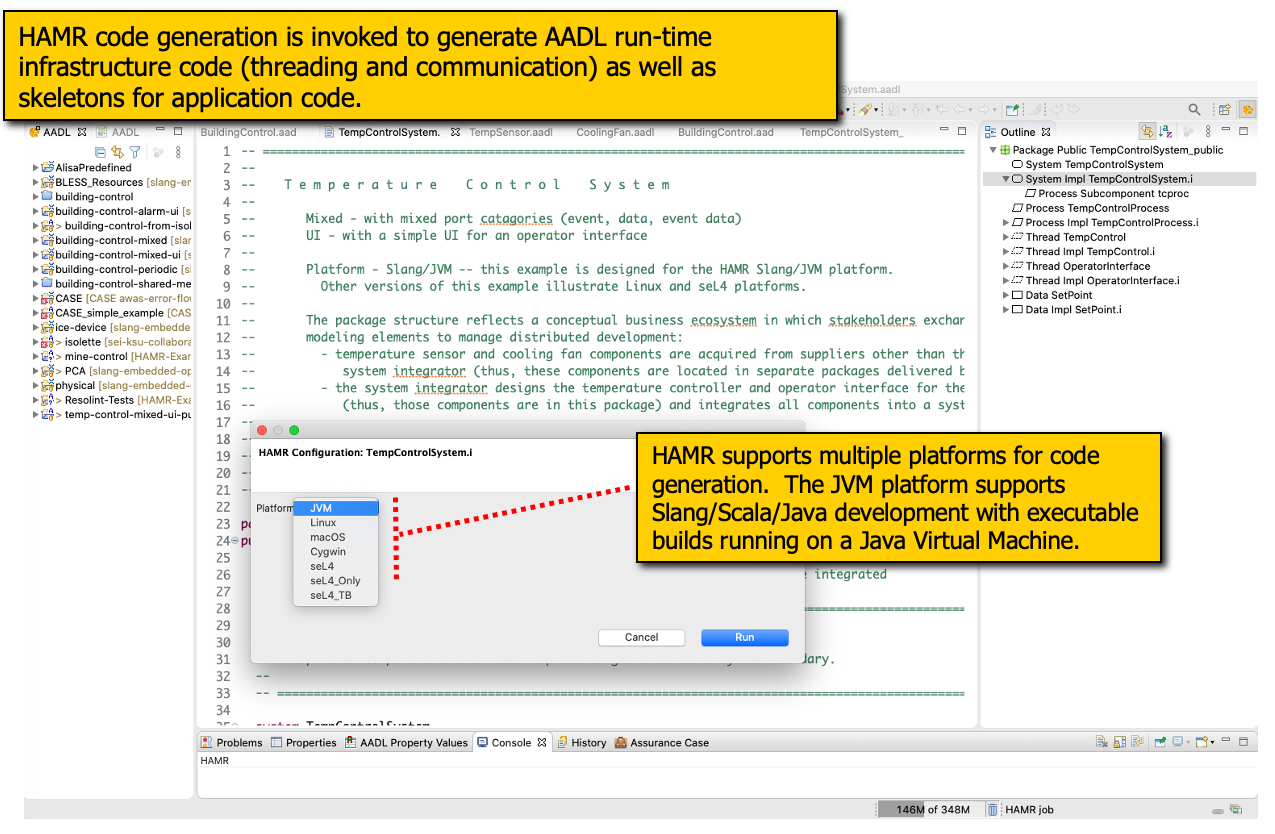 The developer will subsequently implement the system by filling in the code skeletons for the application code, configuring build scripts, adding unit and system tests, etc. The generated infrastructure code is complete and should not be modified in the development process.

However, SBT builds are defined in a Scala data structures (as opposed to XML used in Maven and Ant), and this provides greater flexibility, some degree of type checking on build definitions (utilizing underlying type checking facilities of Scala), and a deeper integration with the Scala ecosystem.

Developers extend the default build scripts as needed to specify library dependences and to tailor execution and testing workflows for the application.